Maps and Missions
Briefings, maps and mission planning resources for all of the scenarios on Combat Box
For each mission we provide an overview map (click for full-size) as well as a link to an il2missionplanner.com JSON file. Download the JSON and the 'import' it into the mission planner if you would like to examine the map in more detail or plan out a bombing run. 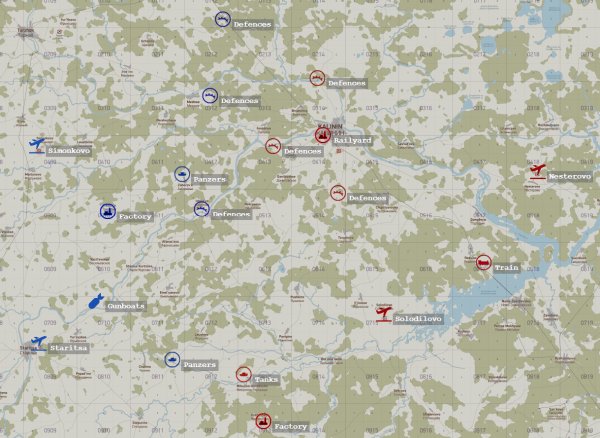 Kalinin, Russia. You are a pilot fighting in an alternative history. In this timeline the Allies never broke Enigma. Instead of access to 'Ultra' -- decrypted German communications across all theatres -- the Allies were relatively blind, relying on more traditional intelligence methods. Although still in a strong position, the Allies did not deliver a crushing defeat to the Axis powers in mid-1944. In fact, Germany still occupies Russian territory and even seeks to expand its reach.

Victory conditions:
The first side to destroy five enemy ground targets will win the map. Not all targets are equally well defended, for example the German gunboats and Russian train only carry the guns that they have with them, whereas industrial depots are more heavily reinforced.

Special thanks to The Nines for support and analysis during map design phase. 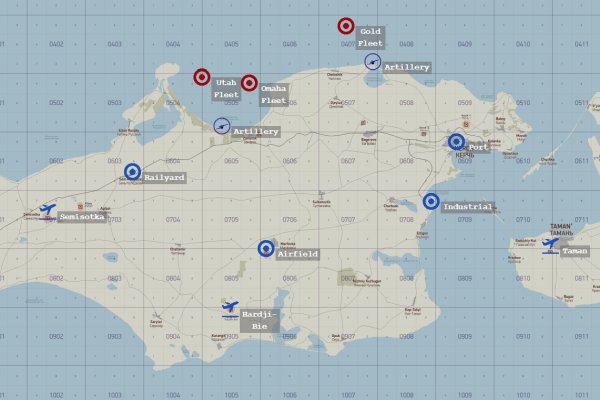 D-Day 1944. The Allies invade German-occupied France via the largest amphibious assault in the history of armed conflict. They land at beaches code-named Utah, Omaha, Gold, Juno and Sword. Resistance is fierce, but the Allies press on.

Phase 1: Allied landing fleets attempt to reach shore. If enough boats land intact, an Allied convoy will begin making its way to a nearby airfield. Allied players can help the invasion effort by attacking German defences and artillery along the beaches, while defending their ships and ground convoys. German players should attack the fleets and ground convoys, preventing the landings from even taking place.

Phase 2: Once the Allies capture an airfield, they begin the Transportation Plan, attempting to knock out German infrastructure that could be used to reinforce or counter-attack. Meanwhile, the Germans try to push the Allies back and destroy their landing positions.

Victory conditions:
The Allies can win by ensuring their fleets reach the shore and convoys capture the airfields, and then by destroying three out of four "Transportation Plan" targets. The Germans can win by repelling the landing fleets or destroying all the Allied beachheads. If the clock runs out, the map is a stalemate and neither side wins.

Special thanks to Talon for envisaging the mission, Psyrion for finding an awesome map location and last-minute testing and debugging, and Red Flight for testing. 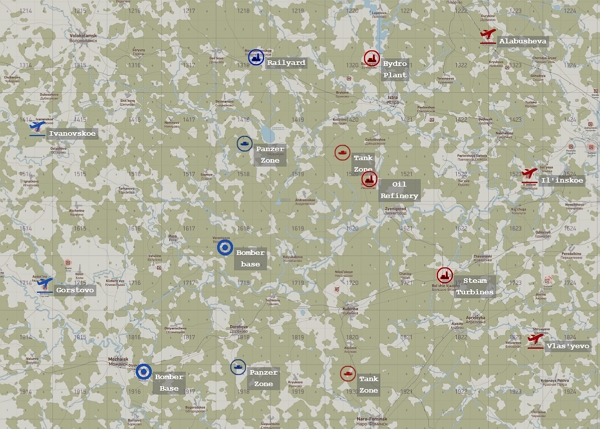 February, 1945. With the Allies advancing on the Western front and the Soviets on the East, Germany is in an increasingly precarious position. Operation Eisenhammer ("Iron Hammer") is an audacious German plan to cripple the Soviet defence industry by destroying hydroelectric and steam power generators, turbines, substations, and transmission lines. Destroying just two-thirds of the turbines will leave Soviet industry largely without power, crippling their war effort, and allowing Germany to focus on the Allied threat.

The Soviets are on high alert with their radar trained on the threat to the West. Both sides have identified high priority targets as well as broad combat zones where pilots are authorized to "hunt and destroy" enemy targets. Complex networks of interlocking flak protect the main targets on either side; pilots should be alert for AAA throughout their missions, not just close to specific targets.

Victory conditions:
Each side must destroy enemy targets while defending friendly targets. The first side to destroy all enemy targets will win. If time runs out, the side that has destroyed the most objectives wins.

Thanks to Quinze, The Nines, Psyrion and SuperEtendard for their input to mission design. 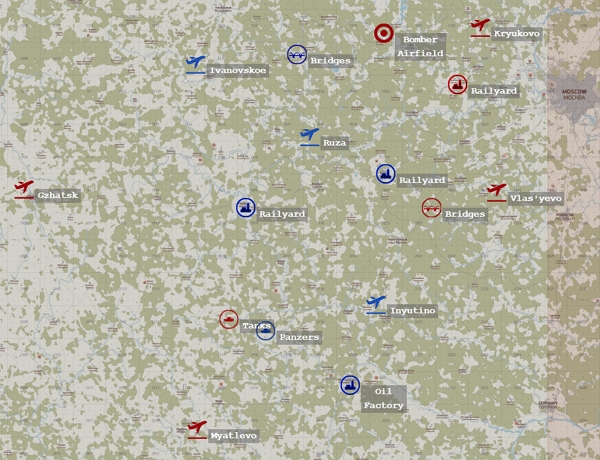 Operating from bases in southern Italy, American aircraft have begun shuttle bombing missions against Nazi Germany. In each 'shuttle', the Allies take off from Italian bases, attack targets in Germany, then land in Soviet Russia.

The Allies shuttle bombing focuses on important German infrastructure such as rail yards and synthetic oil production facilities. After one of their missions, a Heinkel He-111 shadows the Allies and identifies the Ukrainian bases where they have landed. The Luftwaffe assemble a large force and attack the bases where the shuttle bombers are stationed.

Victory conditions:
Each side must destroy enemy targets while defending friendly targets. The first side to destroy four out of five enemy targets will win the map. If time runs out, the side that has destroyed the most objectives wins.

Massive thanks to Psyrion for finding last-minute durability changes that impacted this map. 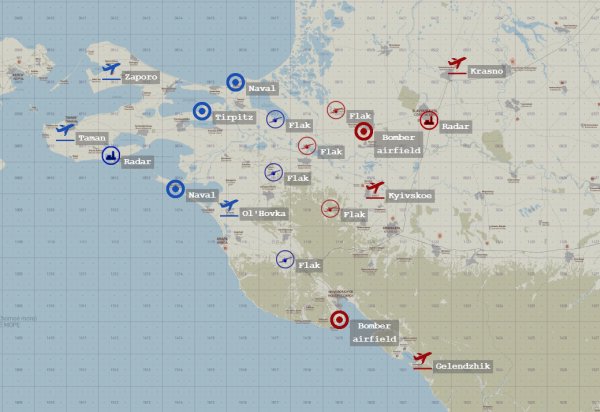 German Destroyer Tirpitz is the heaviest warship ever built by a European navy. She has been threatening the safety of convoys between Great Britain and the Soviet Union and is a high priority target. The Allies have kept up a continued bombing campaign against the Tirpitz, causing the Germans to develop an artificial smoke-screen to protect the ship.

Allies must attack the Tirpitz and several other naval targets in order to win the map. If they are detected by radar en-route to the Tirpitz, the protective smoke-screen will be initiated, but requires five minutes to build up.

Axis players must defend their naval targets and can win the map by taking the fight to the Allies and destroying the bomber airfields being used to attack the Tirpitz.

Victory conditions:
The Allies can win by destroying all three naval targets, or two naval targets and three secondary targets. Axis can win by destroying both Allied bomber bases, or a single bomber base and three secondary targets. If neither side wins outright, the side that has destroyed more valuable targets will win the map. 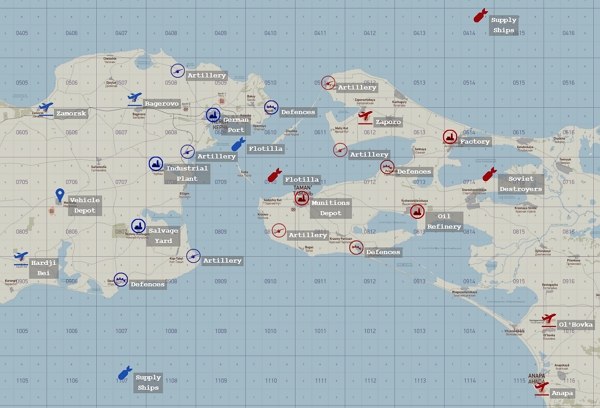 Spring, 1944. After a long winter the Germans find themselves increasingly isolated in the Crimea, having been driven back by Soviet forces the previous Autumn. Keeping a foothold in the region is important because losing Crimea would allow Allied attacks on Romanian oilfields, weakening the Axis position. The Soviets, aided by the Allies, prepare to cross the Kerch Strait and attack German positions.

Both sides send warships and commence air strikes, while expecting reinforcements and supplies from friendly territory. Fighting is expected to be fierce and objectives range from lightly defended artillery and defensive positions to heavily defended industrial and munitions complexes.

Victory conditions:
Each side must destroy enemy targets while defending friendly targets. The first side to destroy the majority of enemy targets will win. If time runs out, the side that has destroyed the most objectives wins.

Original map concept by The Nines. Thanks to The Nines, Psyrion, Quinze and Sketch for their input to mission design, and to Psyrion, Col. Ninny, Mordrac and The Nines for extensive playtesting. 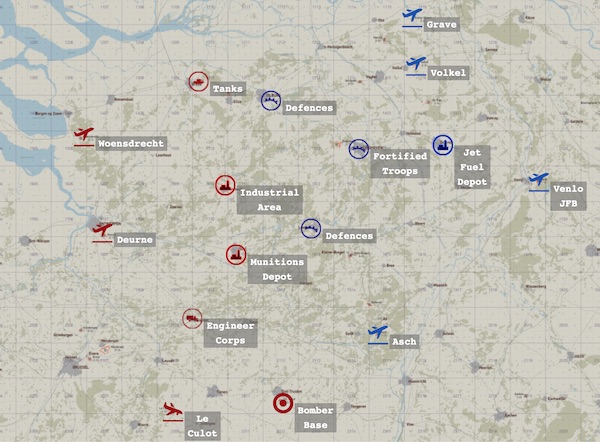 March, 1945. The Allied advance across Europe is in full swing, with Eisenhower's Rhineland Offensive seeking to occupy the entire west bank of the Rhine before its crossing. A major Allied target is the city of Eindhoven, where the Germans have stationed troops and are hunkered down in defensive positions. Both sides have strategic targets that they must defend, and in addition the Allies commit B-25 bombers to aid their mission.

Victory conditions:
Each side must destroy enemy targets while defending friendly targets. The first side to destroy the majority of enemy targets will win. If time runs out, the side that has destroyed the most objectives wins.

Stats, FAQ and feedback at combatbox.net
Thanks to Red Flight for their input to mission design, as well as all their support in creating Combat Box.

A Bridge Too Far 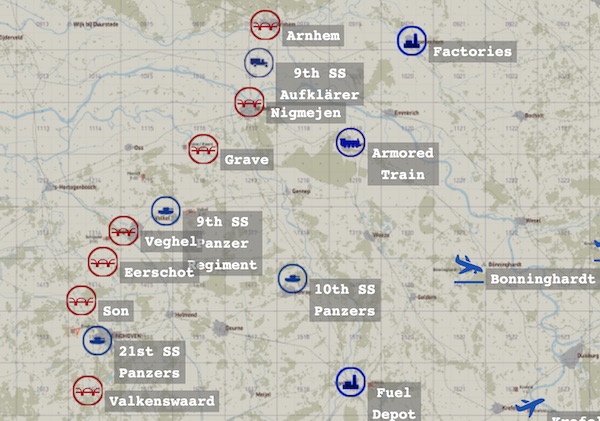 September, 1944. After the D-Day landings, the Allies push across Europe liberating German-occupied territories. But the advance is slow, and costly. Field Marshal Montgomery conceives an audacious plan, Operation Market Garden, to establish a bridgehead over the Rhine and create an allied invasion route all the way into northern Germany. The plan requires massive scale air drops to capture and hold key bridges on the route, as well as a giant convoy of supplies pushing up from the south. The Allies are prepared for possible German counter-attacks or demolition of the bridges, and bring thousands of tonnes of engineering supplies with them.

Victory conditions:
The Allies must defend the captured bridges and destroy German reinforcements and other key objectives. Germany must destroy the bridges, as well as the dug-in Allied Engineers. The first side to destroy six enemy targets will win. If time runs out, the side that has destroyed the most objectives wins.

Stats, FAQ and feedback at combatbox.net
Mission concept and design by Talon with input from Red Flight and our Patrons. Thanks to Nabuli0, Haluter and Mordrac for testing and to all of Red Flight for their support in creating Combat Box.